The open-source database Maria DB continues to stand out against the mother software MySQL. With the leap to version 10, it goes direction analysis of massive data in Internet times. At the same time, tools for administration are displayed.

For a large part of the IT requirements, the SQL-oriented relational database management systems (RDBMS) are completely sufficient and indispensable tools. For Internet applications, however, they have the disadvantage that mass unstructured documents can not be held high. For this, so-called NoSQL databases are more suitable and easier to use. However, these systems lack business-critical features such as consistency and transaction security. Operating a number of database systems is not only responsible for administration, but also for the integration of both sides in order to be able to effectively use them.

The integration of NoSQL databases into an RDBMS environment is an obvious goal, which MariaDB has been able to detect for some time. This open-source database is a fork of MySQL, whose erstwhile core team of Oracle jumped off. In the meantime, the Finnish company SkySQL is responsible for the development, while a MariaDB Foundation is guarding the preservation of the open-source heritage. Up to version 5.5, MariaDB versioning ran parallel to MySQL to underline compatibility. However, while Oracle has released MySQL 5.7, MariaDB is now jumping to version 10 – to highlight differences. 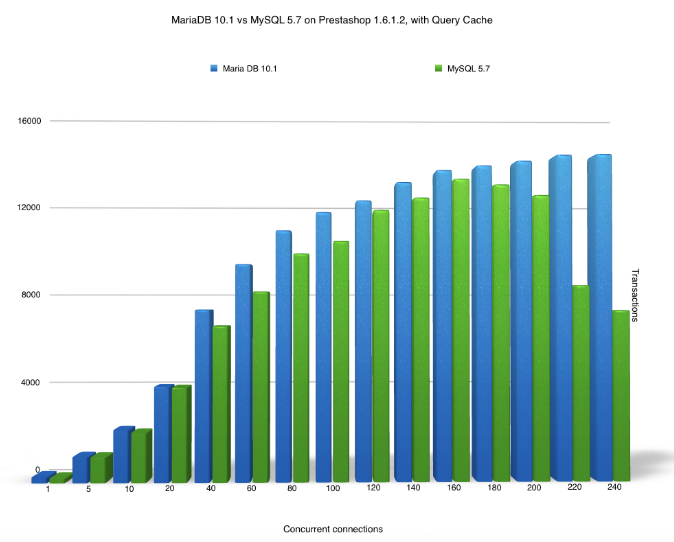 The most important improvements to MariaDB 10 are the throughput and the NoSQL abilities. According to the manufacturer, the performance is up to 10 times better. After the code of the database was “kernanediert” and modernized in about one million code lines, innovations could be introduced. The results are parallel replication, where the replication slaves are crash-backed. It is also possible to simultaneously access various slaves via several master servers, which makes larger amounts of data addressable. A special role is the “Spider” Engine, which can distribute large database tables across multiple servers (“sharding”), which improves performance and scalability.

In terms of NoSQL capabilities, the “Connect” engine makes it possible to dynamically access MariaDB 10 from different data sources. This includes not only external relational systems, but also unstructured files such as log files. MariaDB also received further improvements in the “Dynamic Columns” technique; The variable columns of a table are counted against the NoSQL documents. A column-oriented NoSQL database, namely “Cassandra” from the Apache Software Foundation, can be operated with MariaDB. Cassandra is widely used in big-data scenarios, and this also indicates where the journey of it is going.

With the core rework of the program code MariaDB is no longer 100% MySQL compatible in the new version 10.0. The changes in the direction of performance and NoSQL capabilities Priority was In addition to the MariaDB Foundation, Finnish software company SkySQL is the driving force behind MariaDB. For the next version 10.1, the company promises “100 percent MySQL drop-in replacement”.

Known users of the open source database are Google and Wikipedia. However, the product does not exclusively address the top league of the Internet major users. After spreading manufacturers such as Suse, Red Hat and the Fedora Project Debian open sources MariaDB solution with their Linux distributions. “Continuing to drive innovation remains one of the most significant features of open source,” said Brian Stevens, Red Hat’s chief technology officer. “With the latest release, MariaDB is helping to further strengthen database innovation and meet the future database requirements of enterprise IT, as this database supports rapid evolution and their acceptance.”

Admin tools for MariaDB from SkySQL
MariaDB does not only recommend itself for large database environments as an alternative to MySQL. To make the product manageable even for less demanding applications, SkySQL offers “MariaDB Enterprise 2” a set of add-on tools and services that simplify the setup and management of databases. It includes binaries and installation routines for MariaDB 10, monitoring software “MONyog” from Webyog and “Zmanda” backup software.
A second new SkySQL product, “MariaDB Enterprise Cluster 2”, is targeted at those users who operate much more complex database environments, especially heterogeneous clusters. It includes the “Galera” clusters technology and simplifies configuration, monitoring, performance management, control of the nodes, backups and restores via a user console and a management API. In addition, there is a comprehensive support and update package for both products.
“MariaDB Enterprise Cluster 2 is the entry into a higher high-availability class for users of MariaDB, MySQL and NoSQL,” explains Kaj Arnö, Vice President Collaboration at SkySQL. “SkySQL’s commercial products give SQL the flexibility it needs from the market.”

When to use a Dedicated Server