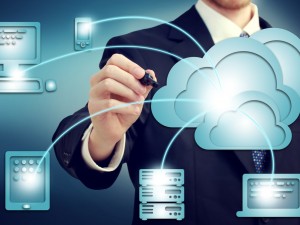 Wen hosting providers and IT pros are beginning to realize innovative projects. The research departments of the IT corporations and the manufacturers of IT components are also helping to make cloud computing more efficient and leaner with new developments.

The growing digitalization in companies also increases the demands on a modern data centers and the cloud infrastructure. A survey of the association Bitkom revealed that 67 percent of the IT firms surveyed by the Association medium ICT companies cloud computing to the relevant technology and market trends in the market. This is 20 percent more than in the previous year.

On October 12, 2015, for example, the practical implementation of such an idea began. Finland and Germany should be connected to a fiber-optic cable linking the digital data world between Eastern and Western Europe more closely. The project is the result of an initiative by the Finnish Government and the EU. This has resulted in a better, safer and brighter connection between important data centers between Central and Northern Europe. Finland is also an important hub for data traffic between Western and Eastern Europe.

The 1,172 kilometer cable was transferred between Helsinki and Rostock through the Baltic Sea. The favorable weather conditions contributed to the successful completion of the laying of the cable after only three months. The cable itself consists of eight fiber pairs and achieves a bandwidth of 15 terabits per second. At the same time, it has a very low latency of about 10 milliseconds. Above all, operators of data centers as well as companies with intensive data traffic benefit from this technology.

So the involved Hetzner Online GmbH as co-investor in this project. The company is planning to build a new data center park for cloud computing near Helsinki. The high-tech glass fiber connection certainly plays an important role. In addition, energy costs in Finland are much more favorable than in Germany. Considering the cost aspect, France could also be considered, but the electricity is generated mainly in nuclear power plants. While Finland is not completely free from nuclear power, it uses a larger share of hydropower and renewable energy to generate electricity. In addition, the climatic conditions with lower local temperatures can be used positively for cooling the servers. In the end, data security guidelines for European companies also play a role in the choice of location. Because Finland is part of the European Community and thus the data of a Datacenter located there remains within the European borders.

Data center on the seabed

A completely different approach to the deployment and operation of data centers for cloud computing pursues a Microsoft project that the name “Natick” bears. Microsoft’s idea takes into account the population distribution in the US: “50 percent of us live near the coast. Why not our data?” Even if it does not reveal what distance for Microsoft “proximity” means, speaks a lot for the success of Natick. What is it about?
A Microsoft White Paper outlines the benefits of a data center underwater on the seabed. When Norman Whitaker, from the Microsoft leadership, read the content of the white paper at the beginning of 2013, and he was so impressed with the idea that he promptly commissioned a team to carry out the investigation. One and a half years later, in August 2014, Microsoft gave the go-ahead for the Natick project, a year later the prototype of the datacenter was named “Leona Philpot” and then sunk off the coast of California.

What is a VPS

How To Install Centos Web Panel (CWP) in Linux VPS